(Excuse the pun, but with Christmas just around the corner we couldn’t resist having a little play on words.)

This property is very unique because it has actually been built on land behind an existing bungalow, which the Wren family had previously lived in for more than a decade. When Mr and Mrs Wren bought their bungalow with it’s huge plot of land, they knew it had massive potential and, 10 years later, they began building this impressive three storey house in their back garden. Mrs Wren explains that the build began in February 2017 and just over a year later the couple moved in. With the existing bungalow still situated at the front of the property, and now being restored, the couple haven’t yet decided whether to rent, sell, or leave it vacant for their teenage children - but they’re excited at the possibilities available to them.

After living in their dark bungalow for more than a decade, the Wrens were certain on one thing: they wanted a lot of natural light in their new home. They knew this would require more glazing but didn’t know exactly where to start. The couple did their research, read through industry magazines and attended self-build shows for advice and ideas. It was when reading an article on Homebuilding Magazine comparing materials for bi-fold doors that the couple first came across Origin.

Julie admits it took her a while to decide between uPVC and aluminium for her doors and windows, but it was at the NSBRC (a self-build show in Swindon) that the couple were able to see a range of products in different materials that they became convinced on aluminium. At the NSBRC event, the Wrens were able to visit the Origin stand, test out the products themselves and ask all their questions. Impressed with the quality of the doors and windows, the couple knew they wanted to go ahead for a whole house of Origin products.

“We’re so glad we chose aluminium over plastic windows. We wanted something that would look good but also last, and that’s what convinced us to choose aluminium,” Julie says. “There was of course a price difference, but we thought that Origin was a good price for what it was. And we’re really happy with the lengthy guarantee we’ve got for all the Origin products we have. It gives us a lot of peace of mind should anything ever go wrong!” The couple chose their local Origin Partner, Abbey Windows, to complete their survey and installation, who came recommended by their builder.

The Wrens installed an array of Origin products throughout their home, including seven sets of bi-fold doors, 26 windows, three gable windows, side flags for their front door and single doors. Julie mentions, “we chose bifold doors instead of sliding doors because we wanted to be able to completely fold the doors back and enjoy better views into the garden”. With bifold doors installed in a number of the bedrooms, the Wrens have really made full use of the bifold door functionality to enjoy open plan living in almost every room in the house. “It’s also great that the bifold doors have finger safe gaskets, so we don’t have to worry about our daughter using the doors in her bedroom,” Julie comments.

When you approach the house, the two impressive gables are the first thing you notice. Enjoying their first Christmas in their new house, the Wrens have made full use of their impactful gables by placing Christmas trees in the windows and fairy lights all around the house. “Despite being essentially large pieces of glass, the house has stayed nice and warm and cosy,” Julie says. “People always comment on how big the front doors are. The aesthetics have really been considered in the design.”

With a gorgeous fireplace in their front room, the couple sit here and appreciate the views out through their fixed windows and gable. “If there’s just one small thing we’d change, we’d have put an opening window in the front room to help draft out smoke from the fireplace!” Julie says quite honestly. “Our friends and family have been really impressed with the overall build, it’s made such a difference to the way we live,” she continues “and we’re so happy with the lengthy guarantee from both Origin and Abbey Windows. We definitely made the right decision.”

We’re so glad we chose aluminium over plastic. We wanted something that would look good but also last, and that’s what convinced us to choose Origin's aluminium doors and windows. 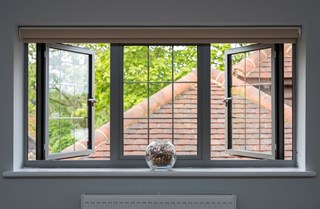 Modernising the Home with a Secure Aluminium Front Door