Bringing the very best out of a barn conversion

Bringing the very best out of a barn conversion

Niall and his wife live in a beautiful barn conversion. When they bought their house, it was still the original brick barn, but included planning permission for modernisation. So, Niall got to work. With previous experience in construction, he had previously built a Victorian house and carried out various renovations on other properties. However, he had always wanted to carry out a barn conversion - and now he had his chance.

His renovation required a good deal of planning, and took 12 months to complete. During this process, Niall drew inspiration from many 'Grand Designs' magazines and other outside influences. He was already familiar with Origin, and also came across our name several times while thumbing through his literature. He felt our products were ideal for his project, and got in touch.

At first, the couple were torn between whether to use Origin's Bifold or Inline Slider doors, but ultimately they opted for the Bifolds. Then, they repurposed the front of the barn to become the front of their new house, complete with an Origin Residential Door. They chose our SE04 door in 7016M, one of Origin's most popular colour panels, for its design simplicity and contemporary look.

They went with another Origin Residential Door, the ST 01 also from our Seamless panel offering, to design their rear entrance. This helps create consistency throughout the house. As Niall confirmed, “We wanted a door that would light up the hallway. The piece of glass in the middle of the Residential door lets a surprisingly large amount of light in, which is great.”

Meanwhile, the two French door sets in the living room area act as excellent side entranceways, providing easy access to the back garden to play table tennis, as well as making a real feature of the log fireplace inside.

Above, on the first floor, Niall installed a set of Origin French Doors with two fixed-pane windows on either side, sitting below an Origin gable which leads out on to a charming balcony. The rest of the house was fitted with Origin windows, and another Origin French Door set in the master bedroom. This set enables a stunning view over the back garden. Their RAL 7016 colour also perfectly complements the house's overall modernity.

As the house is situated on a farm, planning permission limitations somewhat restricted the couples' options for development; however, they are still delighted with the end result. “I wanted to build a timeless house, something that wouldn’t get outdated," Niall explained. "We didn't need to change a lot to get there. We went with white walls and oak floors. It’s minimalist but also stylish - and it always will be."

The new house's attractive open plan allows the couple's living room and kitchen to work together very well. Their corner set of Bifolds stretches across the entire length of the kitchen, completely opening up that area onto the patio beyond, for a fantastic entertaining space.

Both agreed that on reflection, there was really nothing they would have done differently regarding the new build. "Our insulation is nearly 1,000mm thick, so we could have done with cills longer than 225mm to account for the overlapping roof, but it's not a big problem." said Niall.

The couple are happy, settled and ready to move on their next project - the back garden! Niall recently finished preparing a new flower bed, located on the long-end of the house by the Corner set Bifolds and French Doors. Winter 2017 will be the couple's first full winter, but with a thick layer of wall insulation, underfloor heating from their heat sourced pump and a suite of Origin products, their house is well-prepared not just for the coming months, but many years.

I wanted to build a timeless house, something that wouldn’t get outdated 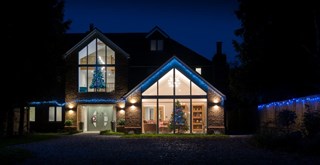 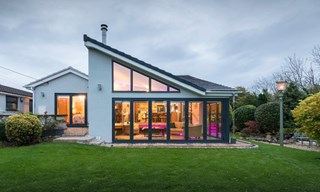 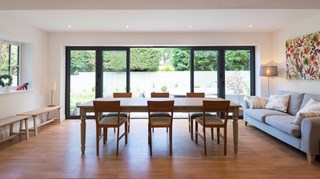