You are using an outdated browser. Please upgrade your browser to improve your experience.

Mr and Mrs Monty began looking for a new door system in their open plan living room/conservatory area almost immediately after moving into their property in January 2017. Originally open plan, the couple knew they wanted to install doors that would divide the rooms into two separate usable areas, but also allow the rooms to remain connected.

Like many homeowners, the Montys investigated French Doors as an option for the doorway, as this would allow them to completely open the doors when they wanted the open plan feel and would bring in lots of natural light to the living room. However, the extra space that the French Doors required to swing open would have obstructed the walkway in the conservatory and use up valuable living space; so, the couple looked into bi-fold doors.

Impressed with the functionality of bi-fold doors, the couple also liked that the doors folded back to one side, which is exactly what they needed for their home. A relative who already had Origin Bi-fold Doors installed in their home recommended Origin to the Montys, stating that the doors were high quality, bespoke and elegantly finished. The Montys got in touch with their local Origin Partner, Paxtons, and discussed their requirements. Given the size of their opening (aperture), the couple opted for a 2 door bi-fold set in a natural oak woodgrain finish to match their existing decor.

As the doors were internal, the Montys chose a non-weathered threshold to create a flush finish between the two rooms.The doors slide effortlessly along the track to the right backing up against their internal wall, creating a practical and open plan space. However, the couple are also able to shut the doors when they want, still making full use of natural light while enjoy doing their own activities in each room without being disturbed.

“The best part of the doors is the way they open up. Most people would have gone for French Doors, but that would have blocked out the area where our table goes, so the space wouldn’t have been practical. Bi-folds saved the day,” recounts Mrs Monty. When asked what advice she’d give to others looking into bi-fold doors for their home, Mrs Monty says, “know your configurations and what works for your space. If you know what you want to achieve, then Origin and their trade partners can help you make the right decision.”

Most people would have gone for French Doors, but that would have blocked out the area where our table goes, so the space wouldn’t have been practical. Bi-folds saved the day 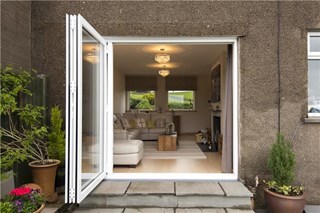 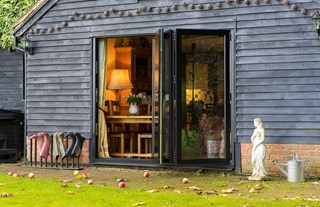 A Modern Touch to a Country Cottage

Creating a wider space for all seasons