During their time living and working abroad, Jamie and Liz bought their property with the intention of one day returning to the UK and renovating it. After several years soaking up culture and learning new languages, the Parrs’ kept their promise and moved back to the UK; and their homebuilding project began.

The extensive renovations began in 2016. The couple state that they considered knocking down the whole building and starting again but couldn’t do this as the building is located on a conservation area. So, the entire house was redecorated. Every room was given attention, from fitting new lights, repainting and completely redecorating. The couple were on a mission to turn their tired property into a modern home. “We wanted a connected home with all the creature comforts”, Jamie says, “the new lights are controlled using WiFi and we installed solar panels to generate electricity cost-effectively.”

Set against an impressive church background, Jamie wanted something equally as impressive and timeless for his kitchen extension. Completely replacing one of the walls with an 8-door Origin Bi-fold set and then a 3-door set on the adjacent wall, Jamie was determined to create the wow-factor that would lend functionality when entertaining guests in the large garden and patio area. To create a contemporary look, the Parrs’ opted for Origin’s Black Grey (7021M RAL), which perfectly frames the carefully considered interior design whilst simultaneously contrasting with the exterior cladding. “The quality of finish and material with the Origin Bi-fold Doors and Windows was exceptional and it influenced our purchase massively”, Jamie says.

The main building also features Origin Windows and French Doors, which make use of Origin’s dual colour option, coloured pebble grey on the exterior and matte white for the interior. The couple created a bay and replaced old French Doors with Origin French Doors, and Origin Windows either side to complete the casement. This combination lets in an immense amount of natural light and scenery, enhancing the living space and creating a real feeling that the indoor and outdoor is one of the same.

Jamie and Liz are delighted with the results: “Having lived abroad over the years, we’ve seen some truly memorable scenery and views. We wanted to create another one in our own UK home.” I think it’s safe to say they achieved this. 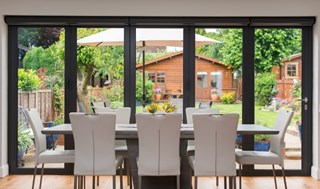 Scouting For a New Home

A Beautiful Garden View, Fit for a Family