A couple from Berkshire are now enjoy stunning riverside views thanks to a £170,000 renovation. Mr. and Mrs. Wright, from Purley on Thames, radically updated their character property to create a huge open plan living area with breath-taking views overlooking the River Thames.

The property was renovated by Dave Wright and his wife, over a three year period, with the aim of making the most of their home’s riverside location.

One major element of the project was removing the existing wooden sliding doors and replacing them with Origin’s sleek, made-to-order aluminium bi-folding doors. The wooden doors were heavy, making them difficult to operate, and they didn’t hold up very well to the weather as they often let in drafts and water. 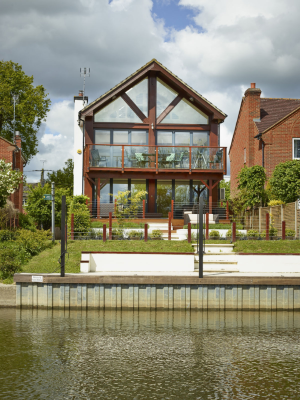 Dave said: “I knew I wanted bi-folds because of the space they offer. I was drawn to the functionality and how you can open up and transform an entire space.”

After speaking with Origin, Dave specified a total of four sets of bi-fold doors, each having three doors. Two of these sets were installed on the ground floor, and are separated by a large wooden beam that runs vertically throughout the house. These doors helped create a seamless link between the living room and front garden, making the most of the space available and drawing the eye to the riverfront views. The doors were fitted into apertures of 2967mm, with each door leaf measuring 939mm by a standard height of 2271mm.

The Wrights installed the other two sets of bi-fold doors upstairs, which open up the open plan kitchen and dining area onto a balcony to create a bright and airy space with amazing views. The doors sit below a gable window which allows natural light to flood into the home. The doors upstairs fit apertures of 2965mm, with each door leaf measuring 939mm by a standard height of 2126mm.

The doors are extremely easy to operate as the wheelbase moves smoothly along the solid aluminium carriage, so all the Wrights need to do to create a whole new living space in their home is simply slide the doors open. The doors were installed just four weeks after they were ordered as a result of Origin’s ‘Your Lead Time, Not Ours’ zero lead time service. This quick service meant the couple’s doors could be delivered exactly when they needed them for their project.

Impressed with the quality and service from Origin, the Wrights continued their renovation project by using Origin Windows throughout the house. Coupled on to the bi-fold doors upstairs are two fixed pane Origin windows. These were supplied as the same height as the doors to ensure that the view is not obstructed by a wall or corner, giving a full panoramic landscape.

The casement windows in the kitchen area were also replaced with Origin’s, which gave a stunning finish, as the flush casement finish has been designed to complement the elegant style of the doors. There are two sets of windows installed in the kitchen which are separated by a bold, white wall. They measure 2560mm x 870mm and 1685mm x 865mm.

The Origin Window was initially launched as Mr. Wright’s doors were being installed, but he and his wife had no hesitation in specifying them for his project as not only are they stunningly finished, but they are also incredibly secure and are available on a one week lead time which is revolutionary in the windows industry.

The Wrights completed the look of their new doors and windows with Origin’s electric roller blinds, and opted for Strata SPC Parchment and Perspective Grey fabric. These blinds are completely bespoke, tailored to the size and colouring of the doors, and gives the Wrights a cosy private retreat in winter.

The innovative addition of Origin’s Bi-fold Doors, Windows and Blinds has given the home a unique, modern feature which means the couple can now enjoy uninterrupted views of the River Thames.

Installation performed by Abbey Windows, who operate in the Berkshire area.