In late 2017, John and Fiona moved into their ‘forever home’. Built in 1990, the property was specifically designed to offer panoramic views over the city of Lincoln; most notably of Lincoln Cathedral, which glows a romantic orange hue in the evening light. So, when the couple moved in, the very first thing they wanted to do was address the elephant in the kitchen: the small doors, thick sightlines, and Georgian bars that weren’t utilising these views. They wanted to completely replace their kitchen/dining room wall with glass.

Originally, the kitchen and dining areas were separated by an island with wooden French Doors either side. John and Fiona wanted to completely open up this space to create one large kitchen dining area that featured the outdoor views as a focal point. They also wanted a door solution that would enable easy access to the patio area and steps that go down to the garden and other areas of the house.

BEFORE
The kitchen dining area separated by an island and the views cut-off with Georgian style glazing and a wall in the middle of the room. 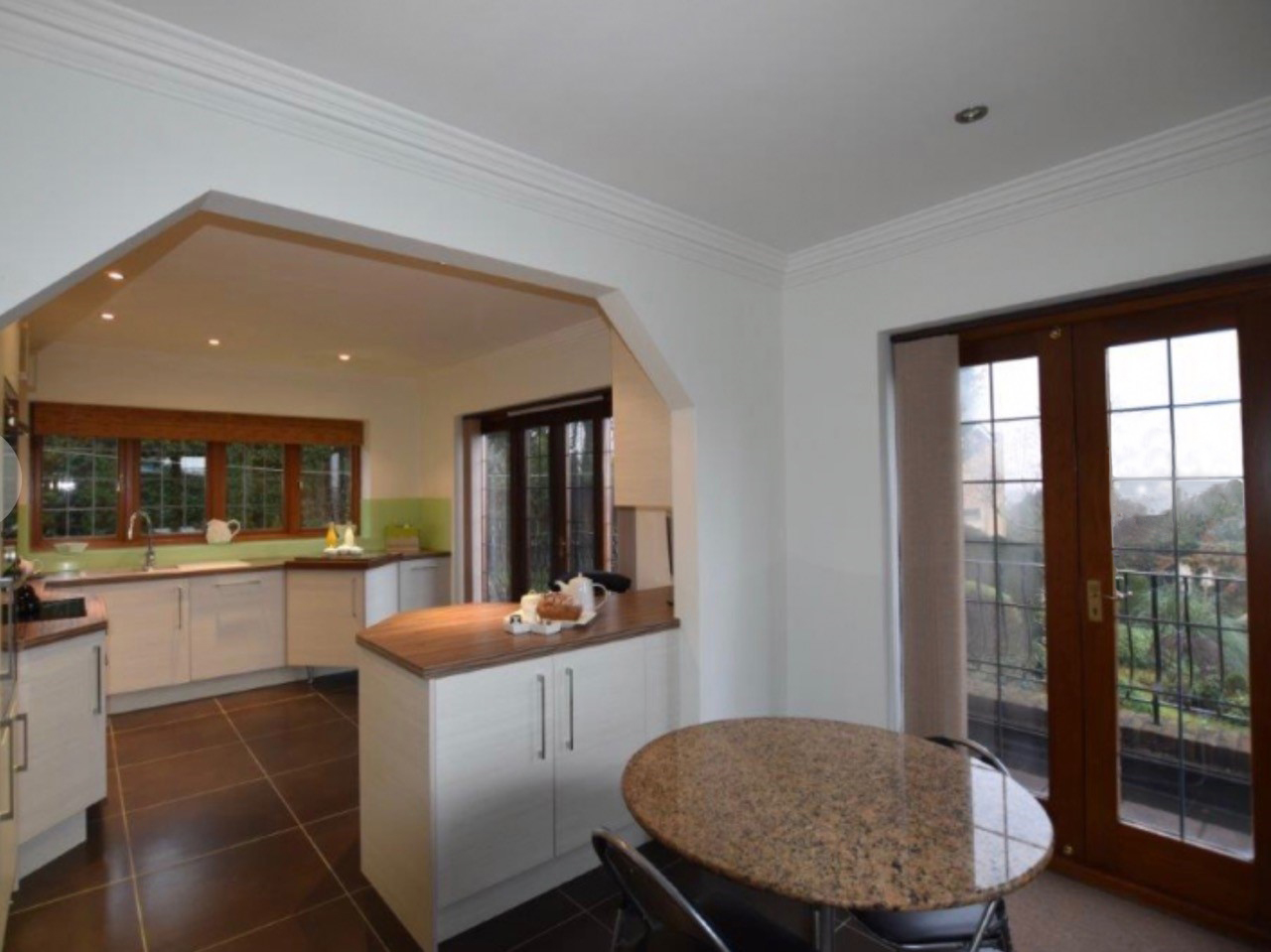 The couple have removed the internal divide to create one room and replaced the French Doors with one set of large Origin Sliding Doors for maximum views. 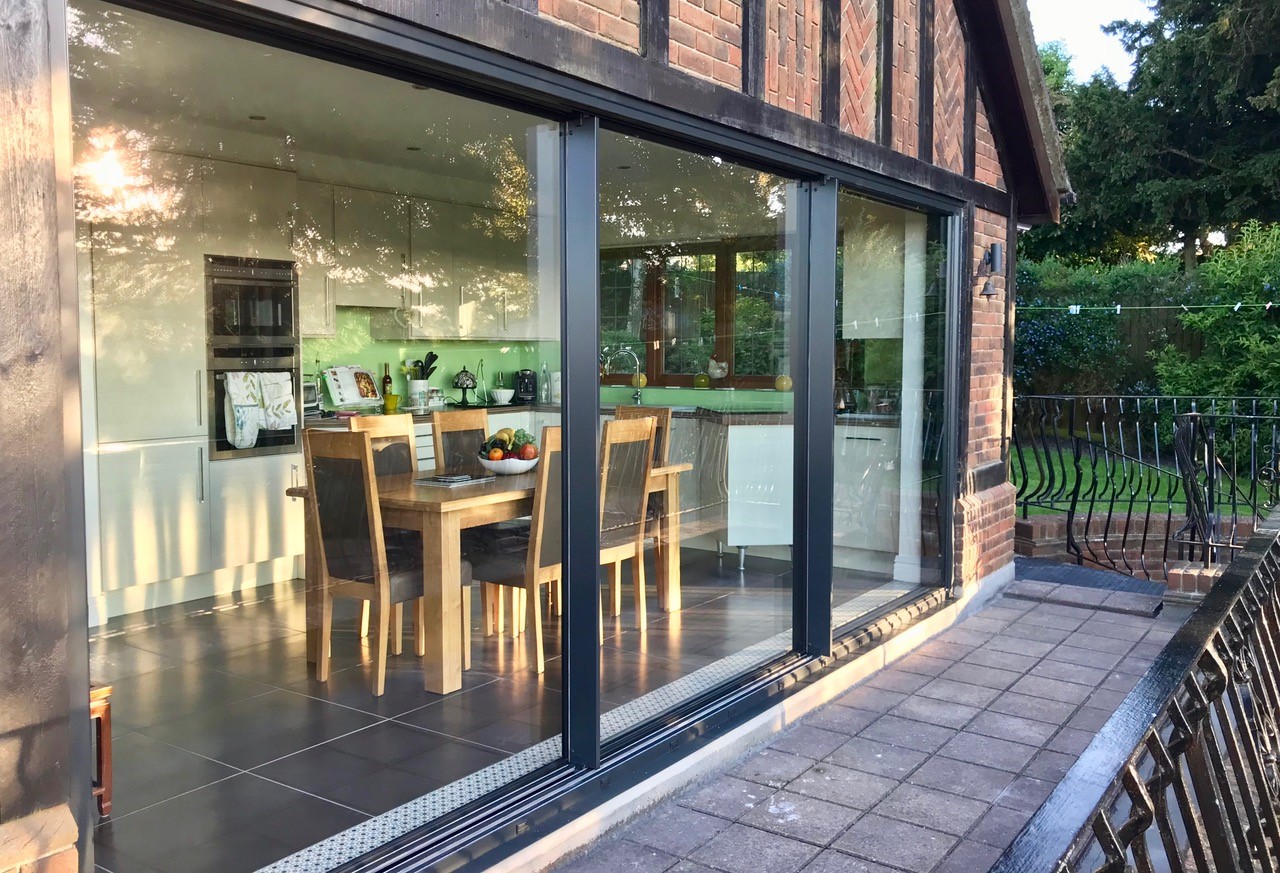 A friend of the couple couldn’t recommend Origin Bi-fold Doors enough after having a set installed in their own home. However, John and Fiona were keen on a widescreen view with as little obstruction of the view as possible, which is exactly what the Origin Sliding Doors offered. What’s more, sliding doors would allow the couple much-needed easy access to their patio steps, which bi-fold doors couldn’t offer because of the need to have them folded back when open. Made from strong yet flexible premium grade aluminium, Origin Sliding Doors can be manufactured to fit complex configurations without compromising strength or security, which is what allows the doors to achieve ultra-slim sightlines.

John and Fiona were referred to Lincoln Window Design by their friend who had provided positive feedback. After seeing the Origin Sliding Door at Lincoln’s showroom and discussing the benefits of Origin Doors, especially the low maintenance, thermal efficiency and strength of the doors, the couple were very interested. They shopped around a little more and were told repeatedly that the 20mm sightlines they had seen on Origin’s Sliding Doors was “impossible” to manufacture. For final confirmation that it was in fact possible, the couple decided to visit the Origin HQ Showroom in High Wycombe, Buckinghamshire. After trying out the doors one last time and discussing their specific requirements with the Origin’s sales team, John and Fiona’s minds were made up.  They rang Lincoln Window on their journey home from the showroom to place the order.

At 2m tall and 5m wide, John and Fiona’s sliding doors are entirely custom made, built to fit the size of their specified opening and every last detail from handle to gasket colour chosen by them. They opted for Black Grey (RAL 7021) for both the exterior and interior door frames, which gives the property a very contemporary look, contrasting beautifully with the red brick exterior and colourful interior design accents. The dark door frames also subtly encase - and lend all focus to - the panoramic city views that the couple love.

Words from the homeowner...

The couple say, “Lincoln Window Design did such a fantastic job and the doors are so easy to open and close”. They particularly like that the doors are designed and manufactured in Britain and provide a triple sliding function, which proves incredibly useful - enabling them to have a variety of opening configurations. Another feature the couple like is that there are no exterior locks on the doors, so the doors look that much more smooth and sleek. “Everyone has been very impressed, especially family who saw it before the transformation,” the couple continue, “we use the doors every morning, bringing the outside in, and love how beautiful and elegant they are.”

“The triple sliding function gives us unparalleled flexibility on opening options, which we have already utilised. Having an extended family means we have quite a few big BBQs and events - the windows enable us to make the transition from outside to inside much easier,” John states. The couple are now considered installing a set of Origin Bi-fold Doors in their living room, which will also create better views for the couple - currently limited by a set of French Doors and windows.

We use the doors every morning, bringing the outside in, and love how beautiful and elegant they are