Origin investigates a lifetime of homebuying

Have you ever thought about the future and wondered whether your home will still suit your lifestyle in the future? Perhaps you’re planning on starting a family and want to make sure you have enough bedrooms, or your children have flown the nest and you’re thinking about downsizing.

At Origin, we have helped thousands of customers to update, renovate and improve their homes to fit with their changing lifestyles. To find out more about the different stages of property buying for the average British homeowner, and how property aspirations change over time, we conducted research among 2,000 UK homeowners. This showed some interesting results...

The Buyer’s Timeline The average age that UK homeowners bought their first property was 26, although we most commonly move out of our parent’s homes at the age of 21. We’ll most often have two rental properties under our belts before we get on the property ladder.

Seven in 10 homeowners jointly own their property with their partner and a fifth received money from their parents to help them get on the property ladder.

Once we get on the property ladder, there’s no stopping us – the average Brit lives in seven different homes throughout their lifetime!

Moving Home Typically, it takes four months and three weeks to get settled into a new home. It’s far from a relaxing experience, however, as over half of us describe moving home as the most stressful thing we’ve ever done.

With the cost of moving so high, and considering the stress of it all, we have seen that many families now choose to improve their current homes, rather than move.

Many years ago, a home would be for life, but that changed and people started moving as their needs shifted – whether it be as a result of new job or starting a family.

Today, we are seeing a resurgence of people choosing to renovate and improve their current property so it fits with their needs without incurring moving costs.

Just to put it into perspective, removal vans, paying legal fees and stamp duty alone will cost us a whopping £14,138 over our lifetime.

Mortgages – The Scores on the Doors The average mortgage will take 20 years and nine months to pay off – costing a total of £134,864.82 in the process.

On average, respondents will contribute towards two separate mortgages over their lifetime, and will typically look to downsize age 56.

The average UK property is estimated to be worth £249,127 among those polled – while the typical mortgage is £542.41 per month.

Of those who have ever had a mortgage, 39 per cent have paid it off.

Our House Style The average Brit will spend £26,295 on redecorating during their lifetime. The most popular style of interior is ‘modern’ followed by ‘English country’ and ‘minimalist’.

The average UK home has three bedrooms, while eight in 10 adults own a home with off-road parking and over half own a house with a garage. Properties built in the 1950s were most popular, with 29 per cent of people saying they lived in these homes.

A third of home owning Brits currently live in a semi-detached property, over a quarter live in a detached house and 15 per cent live in a terraced home.

FIVE STAGES OF BEING A HOMEOWNER:

By speaking to homeowners of all ages through the research, we have identified five distinct homeowner stages that we most commonly go through. Each shapes the composition of the home that we live in now, and our home aspirations for the future. 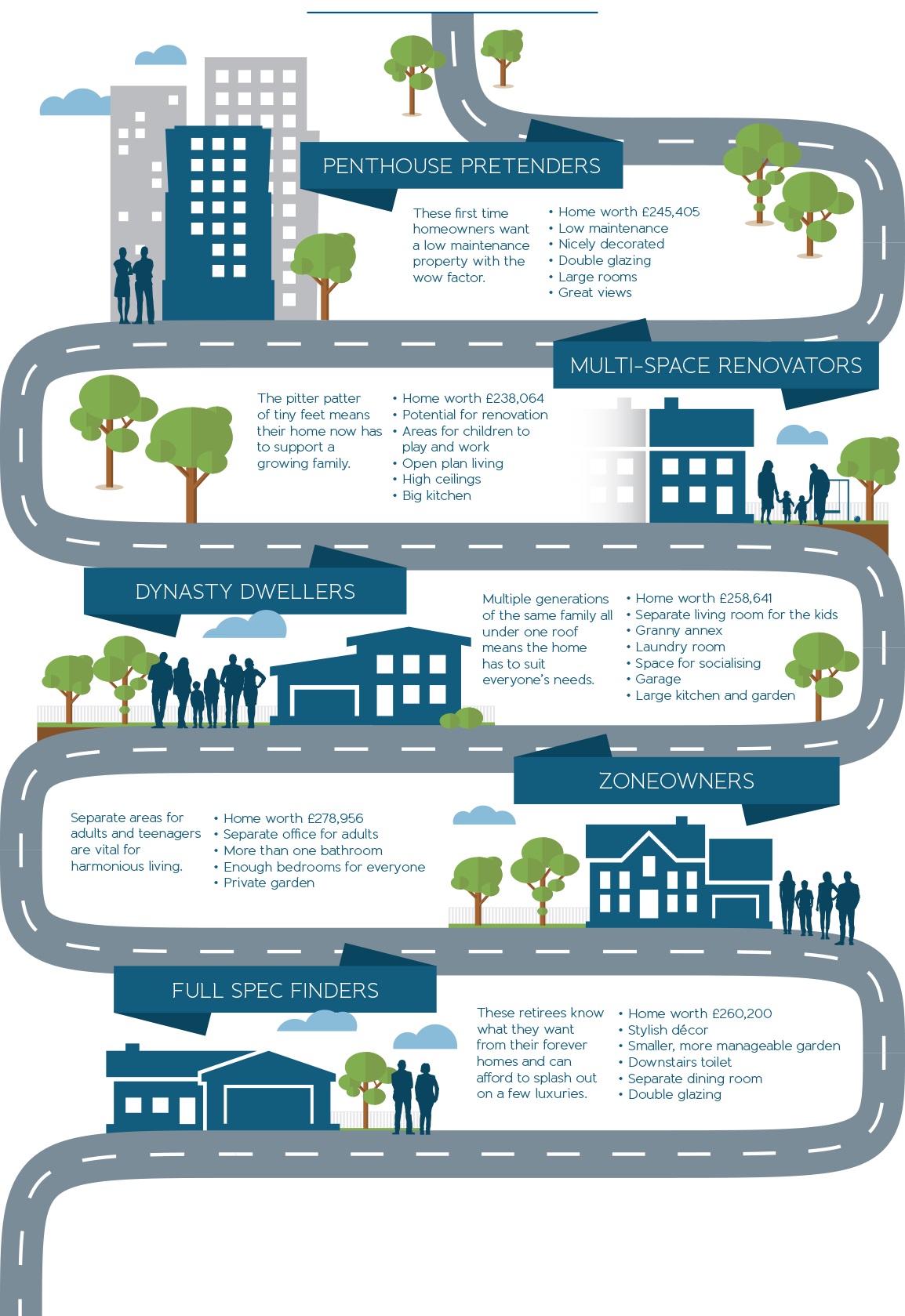